The Global Future of the French Language

with Frederic Jung, Consul General of France in San Francisco 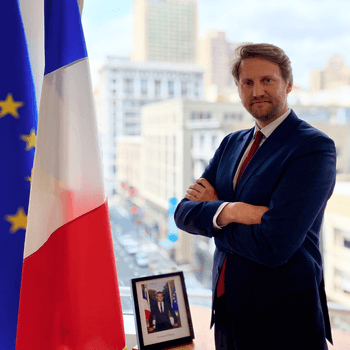 Frederic Jung was appointed Consul General of France in San Francisco on August 28, 2020. Originally from the Alsace region of France, he is a graduate of the Institute of Political Studies in Strasbourg.

He joined the French Ministry for Europe and Foreign Affairs in 2004.

The various positions he held in Paris and abroad led him to develop a particular interest in the United Nations and the European Union.

In Paris, he dealt with disarmament and non-proliferation issues, and then negotiations at the UN Security Council regarding the Middle East. In New York, from 2009 on, he was a negotiator on African issues at the French Mission to the United Nations, before becoming the Mission’s spokesperson until 2014. He then moved to Brussels to become the spokesperson for the Permanent Representation of France to the European Union, dealing in particular with the eurozone, migration and security issues at the European level.

From May 2017 to August 2020, he was seconded to the French Ministry of Interior as the diplomatic advisor to the Minister.

How to Join the Talk: Free event, in English, accessible for all. Registration below is mandatory. You will receive the conference link by email upon registration. Please be advised that the conference is limited to 100 participants.

About the Organizer: AFSeattle is a 501(c)(3) educational and cultural non-profit organization registered in the state of Washington since 1987. It is a member of an 800+ network of Alliances Françaises around the world and aims to promote French language and Francophone cultures towards a variety of programs. Discover AFSeattle's membership program and ways to support here.


Sorry, you've missed the RSVP deadline for this event.